Godlike wrote: ↑
Sat Dec 23, 2017 9:52 am
Yeah DS4 FW can be dumped from the 1.76 hacked console for some months. Probably they used it to hack gamepad authentication. There's 4.05 hack in the works and private 5.01 exploit. It will surely be an interesting time.

Probably, but they also found the way for the X1 and Switch gamepads

Is there a public dump of a successful PS4-DS4 authentication? The Wiki articles that cover the auth packets are wrong / incomplete.
Top

Authentication is based on symmetric cryptography. Replaying a successful authentication will not work.
GIMX creator Donate Shop
Top

I was wondering, because it all looked too simple - get nonce, sign nonce, send nonce. After getting a dump it seems its actually quite different.

The console sends the 0x100 (256) bytes long nonce, but the controller responds with two messages (separate by padding), 528 and 256 bytes respectively, spanned across 17-18 packets.

For the sake of Googlers passing by, the auth works as following for the USB controllers:

You'll have to get a dump of the DS4 in order to get valid serial_num, n, e, casig and private_key with which to sign the nonce. I'm not sure if the capability is present/active, but Sony might be able ban known/public DS4 dumps. Similar to how Certificate Revocation works in TLS.

Why so many packets?

The controller's descriptors set the maximum packets size at 64 bytes. Usable data (without the checksum and the header) is 56 bytes.

What is sequence and packet counters?

The console sends auth requests periodically, in order to know which request you're answering, you have a sequence counter. This counter is set by the console and does not change, until a new auth request is issued.

Packet counter is the packet number within the sequence. As data is split in multiple packets, the console needs to keep track of the order.
Last edited by billy.joe on Wed Apr 11, 2018 12:09 pm, edited 3 times in total.
Top

Iam trying to find out why the Hori Pad FPS4 behaves different to a Sony DS4 controller.

Another thing.. When i emulate the PS4 communication to the controller, having a static nonce will result in a different signature every time (even when i leave the sequence counter the same value!!). I would expect them to be the same. This only occurs when i write all the 0xF0 SetReports (the last one will exectute the signature calculation, because when i skip that packet, the output does is the same as the last challenge) 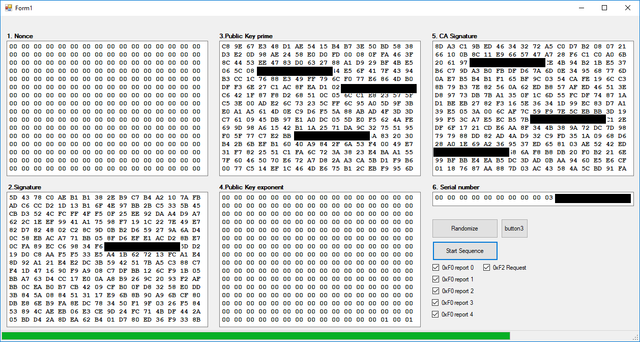 P.S. obfuscated some values for the obvious reason.

Anyone a suggestion?
Top

USB's packets are CRCed by architecture so that might be possible.

what am i missing here?
Top
Post Reply
19 posts